The Beauties of the Island

I spent some time on the first weekend of the New Year watching the PBS/BBC documentary Queen Victoria’s Children. In the three-part film, Queen Victoria comes across as a controlling, eternally disappointed mother to her brood of nine. I was particularly interested in her second son and fourth child, Prince Alfred, whose story interacts with that of the Salmon/Brander family of Tahiti.

Packed off to the Royal Navy at only 14, Prince Alfred was probably more fortunate than his brothers and sisters as he was able to escape his mother’s strictures and restraints. But this freedom came at a cost. He was far from home serving as a lieutenant on the HMS Racoon when in December 1861 his beloved father Prince Albert died of suspected typhoid fever.
Five years later the Prince was promoted to captain, granted the title the Duke of Edinburgh, and given command of the frigate HMS Galatea. In return, the British government tasked him with sailing the world as a kind of colonial ambassador on his mother’s behalf, a job that suited his nature very well. In 1867 and 1868, he visited the Cape Colony in South Africa and then went on to Australia where he became the first member of the royal family ever to set foot on Australian soil. He spent five months touring around the vast country and was met with great enthusiasm.
However, on March 12th, 1868, on his second visit to Sydney, he was attending a picnic to raise money for the city’s Sailors’ Home at Clontarf. The Melbourne Argus described what ensued: “The Prince arrived at two o'clock, and, after luncheon, was walking with the Countess of Belmore and Sir William Manning, when an unknown elderly man came behind him, and drawing a revolver, shot the Prince... He fired at the Prince's back, when two paces off. The bullet entered two inches from the spine, passed through the muscles of the back, and round by the ribs to the front of the abdomen. The Prince immediately fell, exclaiming, ‘My back is broken.’ …the crowd rushed to raise the Prince and seize the assassin, who was only saved from being torn piecemeal by the exertions of the police and the Chief Justice… The Prince was carried on board the steamer Morpeth about four o'clock, suffering intense pain. Two lines of citizens formed an avenue from the marquee to the steamer, and profound grief was manifested by them. Many ladies fainted as the Prince was borne by. He arrived in Sydney about five o'clock, and was conveyed to Government House. The wound is not thought to be mortal, though it causes great pain.”
The Prince was enormously lucky to survive as the bullet just missed his spine, but in fact he made a remarkably swift recovery, much to the relief of the citizens of Sydney who voted to erect a monument in his honor.

In 1869, Alfred set out on a second world tour that was to take in Hawaii, New Zealand, India and Japan. On the way to Hawaii, HMS Galatea made a stop at Tahiti, and like so many others before and after him, Prince Alfred fell in love with the island. In a letter to his mother, he wrote, “I cannot tell you what a treat it was to arrive at Tahiti in the midst of all that tropical beauty of scenery amongst the most peaceful and charming inhabitants.” The Prince told his mother about being taken by the Governor to meet Queen Pomare. “This was one of the most impressive sights I have ever seen. The population of Tahiti and the neighbouring island of Eimeo [Moorea], who had all collected in town by the Queen=s order, were ranged along both sides of the way to the Queen=s palace (which is a low hut but very tidy and nice) and sung songs of welcome.” The Queen herself he described as being “a very kind good-natured old lady” while quipping that the Queen=s figure was a large as “two Dowager Duchesses of Somerset.”
While the HMS Galatea was in port, John Brander, the most powerful European landowner on the island, entertained the Prince and his fellow naval officers at Brander’s charming plantation house at Mahina. The 25-year-old Prince fell for the charms of the host’s much younger wife, Princess Titaua. Although Titaua had recently given birth to her seventh child, she was only 27 and very beautiful.

The Prince spent many enjoyable hours in the company of Titaua and her guests. His partiality for her was so evident that it occasioned some gossip. A photograph was taken of the group in which Titaua is sitting at the Prince’s feet and leaning on his knee, which must have fanned the flames of the rumor mill.
The wife of another European trader, Mrs. Dora Hort, wrote waspishly, “The Prince and his companion Lord Charles Beresford, I can well believe had a very good time during their brief visit to Tahiti. If H.R.H. [His Rotal Highness] failed in devoirs of etiquette… towards his own consul and the Roman Catholic bishop, he was to be excused on the plea that there were no seductive natives or half-castes at either the Bishop’s Palace or the Consulate, and naturally he preferred to frequent those houses where he could amuse himself with the sirens of the Pacific.” Dora Hort’s reference to “half-castes” was probably aimed at Titaua who had a Tahitian mother and an English father, as Mrs. Hort cordially loathed Mrs. B (as she called her). 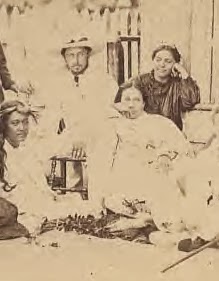 The term is also used in a report about the Prince’s visit to Tahiti that appeared in the New York Times on September 5, 1869. Much can be read between the lines. The report says: “The Prince and suite associated with the half-caste population, and several photographs were taken of the Captain of the Galatea, one of which represents him standing between two half-caste girls. All the European houses were open to the officers and all the best feeling prevailed with everyone. Dinners and balls were given and the Prince was forced to remain four days longer than intended.” Or maybe he simply could not tear himself away from Titaua’s side.

When he left, he presented Titaua with a turquoise and diamond ring and pendant, which she kept all her life and passed on after her death to her daughter Georgina. Prince Alfred would clearly have liked to have stayed longer. He wrote to his mother, “We were all very sorry to leave Tahiti and regretted the shortness of our stay which prevented us [from seeing] more of the beauties of the island.” No doubt he hoped Queen Victoria would assume he was referring to the scenery.
Prince Alfred had a long and distinguished naval career, culminating in his appointment as Commander-in-Chief, Plymouth in 1890. Three years later on the death of his uncle he inherited the title of Duke of Saxe-Coburg-Gotha in the German Empire, but he was not happy living in the landlocked duchy far from the sea. And his last years were marred by tragedy. In January 1899, during the 25th wedding anniversary celebrations for Alfred and his wife, the couple’s only son shot himself after becoming embroiled in a scandal involving his mistress, dying two weeks later of his self-inflicted wounds. Eighteen months later, Alfred himself died of throat cancer at the age of 55. He was mourned by his four daughters, including the famous Marie, Queen of Romania.

Posted by Fiona J.Mackintosh at 9:16 PM