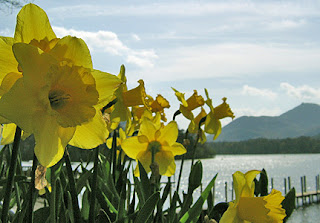 This coming weekend I will be flying across the Atlantic to visit my family for a couple of weeks. This is the first time in many years that I will heading home at this time of year, and I am looking forward to it.
I always love spring in the Washington area. First, the magnolias start to bloom and then the cherry blossoms burst forth in their short-lived glory, after which there’s the wisteria and the azaleas to look forward to in April and May before the temperature starts to creep up into the unbearable range and the mosquitoes start biting. But I do miss the spring in Britain – the intense green of the rain-fed grass, the clusters of hardy snowdrops and delicate primroses, carpets of crocuses and of course the bright cheeriness of the daffodils – my favorite flower.
After suffering a spell of arctic winter weather in February, south-east England – where I’m bound – is forecast to experience more balmy temperatures at the beginning of March. So I’m looking forward to smelling the damp earth (because it’s bound to rain at least some of the time) and seeing Wordsworth’s golden trumpets “fluttering and dancing in the breeze.” By the time lambing season arrives and the woods are full of bluebells, I’ll be gone but I’ll have still had a brief whiff of England as “blossom by blossom the spring begins.”
From Atalanta in Calydon (1865) by Algernon Charles Swinburne
For winter's rains and ruins are over,
And all the season of snows and sins;
The days dividing lover and lover,
The light that loses, the night that wins;
And time remembered is grief forgotten,
And frosts are slain and flowers begotten,
And in green underwood and cover
Blossom by blossom the spring begins.
Posted by Fiona J.Mackintosh at 8:38 PM No comments:

The Republic of the Imagination

So what did Dickens make of America? To say he was disappointed would be an understatement. He had started out on his journey with a mental picture and when the reality did not meet his expectations he lashed out – first in his private letters home and then in print.
As he travelled down the eastern seaboard he was mobbed by fans wherever he went. At first Dickens was gratified by this, but it soon became oppressive. He had come to see the fabric of America and his own fame was getting in the way. But once he turned away from the main cities, the attention waned enough to allow him to be the observer he wished to be. He saw prisons, hospitals for the insane, reform schools, schools for blind and deaf children, factories, and industrial mills. By train, stagecoach, and steam boat, he ranged as far north as Niagara, as far south as Richmond, and as far west as St. Louis.
The tour was full of new and remarkable scenes - the pigs that roamed the streets of New York, the nation’s legislators spitting tobacco juice on the marble floors of Congress, the lonely, flat immensity of Looking Glass Prairie near Lebanon, Illinois, the wonders of Niagara Falls. But by the end of his journey, Dickens was profoundly disillusioned with the country he had wanted so much to know. He wrote home to his friend William Macready, "this is not the republic I came to see; this is not the republic of my imagination."
But for Dickens, the America of 1842 seemed a society completely in thrall to money and commerce, nowhere more evident than in the slave trade. On the train from Fredericksburg to Richmond, he saw a small human drama that encapsulated for him the horror of the legal traffic in humanity. “In the negro car...were a mother and her children who had just been purchased; the husband and father being left behind with their old owner. The children cried the whole way, and the mother was misery’s picture. The champion of Life, Liberty, and the Pursuit of Happiness who had bought them rode in the same train; and every time we stopped got down to see that they were safe.”
Such scenes seemed to impregnate all Dickens’ impression of the young republic. On his return to London, he took only four months to write a book-length account of his trip, American Notes for General Circulation. In it he attacked the venality and dishonesty of the bulk of the American press and the coarseness of political life and expressed in vehement terms his abhorrence for the practice of slavery.
When American Notes was published, Dickens’ American fans felt betrayed by this unexpected onslaught of vitriol, and this was compounded by his next novel, Martin Chuzzlewit, in which he satirized the United States as full of conmen and described it as “so maimed and lame, so full of sores and ulcers... that her best friends turn from the loathsome creature with disgust.”
The national press railed against this attack on their national pride, and Dickens’ American sales slumped. But his subsequent novels – starting with A Christmas Carol in 1843 - were too compelling to be ignored, and his sales of the American editions (many of them pirated from copies originally published in Britain) were soon as high as ever.
It was a quarter of century before Dickens returned to the United States. In 1867, he embarked on a triumphant tour of the eastern states on which he read – or rather acted out – passages from his most famous books to sold out audiences night after night.
Two years had passed since the end of the Civil War, three since the Emancipation Proclamation. This was a much-changed America, and Dickens knew it. In a speech at a public dinner in New York gathering in April 1868, he spoke approvingly of “the amazing changes I have seen around me on every side ‒ changes moral, changes physical, changes in the amount of land subdued and peopled, changes in the rise of vast new cities, changes in the growth of older cities almost out of recognition, changes in the graces and amenities of life, changes in the Press, without whose advancement no advancement can take place anywhere.”
And he added a gracious admission that his first impressions may have been hasty and exaggerated. “Nor am I, believe me, so arrogant as to suppose that in five-and-twenty years there have been no changes in me, and that I had nothing to learn and no extreme impressions to correct when I was here first.” And he added this tribute to the American instinct for hospitality, “Wherever I have been, in the smallest places equally with the largest, I have been received with unsurpassable politeness, delicacy, sweet temper, hospitality, consideration, and with unsurpassable respect.”
At last, the hatchet was buried. The New York Tribune declared that “Dickens' second coming was needed to disperse every cloud and every doubt, and to place his name undimmed in the silver sunshine of American admiration.” The republic had been restored to its rightful place in the imagination of Charles Dickens.
Posted by Fiona J.Mackintosh at 6:24 PM No comments:

Another Ocean in the Air

﻿ ﻿
In honor of the 200th anniversary of the birth of Charles Dickens today (February 7, 2012), I would like to share with you my favorite comic passage from his many published works. American Notes for General Circulation was his nonfiction account of his first tour of the United States in 1842. Dickens was 29 years old, already world famous for the serializations of his novels The Pickwick Papers, Oliver Twist, Nicholas Nickleby, and The Old Curiosity Shop. He was keen to visit America to observe first-hand the young republic in action only 50 years after its independence from Britain.
Accompanied by his wife Kate and her maid, he embarked on the steamship Britannia in the port of Liverpool on January 3, 1842. On the third morning, Dickens was woken by a shriek of alarm from his wife as the ship was flung violently around by very heavy seas whipped up a strong head wind.

“The water-jug is plunging and leaping like a lively dolphin; all the smaller articles are afloat except my shoes, which are stranded on a carpet-bag, high and dry, like a couple of coal-barges. Suddenly I see them spring into the air, and behold the looking-glass, which is nailed to the wall, sticking fast upon the ceiling. At the same time the door entirely disappears, and a new one is opened in the floor. Then I begin to comprehend that the state-room is standing on its head. …Imagine the wind howling, the sea roaring, the rain beating: all in furious array against her. Picture the sky both dark and wild, and the clouds in fearful sympathy with the waves, making another ocean in the air. Add to all this the clattering on deck and down below; the tread of hurried feet; the loud hoarse shouts of seamen; the gurgling in and out of water through the scuppers; with, every now and then, the striking of a heavy sea upon the planks above, with the deep, dead, heavy sound of thunder heard within a vault; - and there is the head-wind of that January morning. I say nothing of what may be called the domestic noises of the ship: such as the breaking of glass and crockery, the tumbling down of stewards, the gambols, overhead, of loose casks and truant dozens of bottled porter, and the very remarkable and far from exhilarating sounds raised in their various state-rooms by the seventy passengers who were too ill to get up to breakfast.”

Bad as this was, there was worse to come. On the evening of the tenth day out, the ship sailed into a gale-force wind that raged for twelve brutal hours. The passengers must have been afraid for their lives, knowing that many a transatlantic ship was lost at sea. Yet in the midst of this chaos, Dickens found himself “in a situation so exquisitely ridiculous, that even then I had as strong a sense of its absurdity as I have now.”
His wife, her maid and a Scottish lady passenger “being in such ecstasies of fear that I scarcely knew what to do with them, I naturally bethought myself of some restorative or comfortable cordial; and nothing better occurring to me, at the moment, than a hot brandy-and-water, I procured a tumblerful without delay. It being impossible to stand or sit without holding on, they were all heaped together in one corner of a long sofa - a fixture extending entirely across the cabin - where they clung to each other in momentary expectation of being drowned. When I approached this place with my specific, and was about to administer it with many consolatory expressions to the nearest sufferer, what was my dismay to see them alll roll slowly down to the other end! And when I staggered to that end, and held out the glass once more, how immensely baffled were my good intentions by the ship giving another lurch, and their rolling back again! I suppose I dodged them up and down this sofa for at least quarter of an hour without reaching them once; and, by the time I did catch them, the brandy-and-water was diminished by constant spilling to a tea-spoonful."
No doubt Dickens was alone in seeing the comic side of the incident at the time. To everyone’s enormous relief, the storm abated the next morning, having torn away the covers of the steamer’s paddle-boxes, knotted the rigging, and smashed the life-boat “like a walnut shell.” The rest of the journey was uncomfortable but uneventful. The Britannia made landfall in Boston on January 22, 1842, giving Charles Dickens his first glimpse of the “republic of my  imagination.”
To be continued.....
﻿﻿
Posted by Fiona J.Mackintosh at 5:16 PM No comments: