From Sea to Shining Sea


This spring, I, who normally live most of my waking hours within the four walls of my home office in suburbia, suddenly found myself flung across oceans and prairies to places both new and familiar.

In March I found myself among the boho Pacific beaches and the freeways of the San Diego area. The southern California of my imagination was constructed of piecemeal images from my youthful cultural experiences – David Hockney’s swimming pool paintings, Joan Didion’s Play It As It Lays, and Joni Mitchell singing “Breaking like the waves at Malibu” and “Oh make me feel good rock and roll band, I’m your biggest fan, California, I’m coming home.”

In reality, SoCal was all those things and more – rows of twisted palms like Dr. Suess’s truffula trees in The Lorax, colonies of sealions draped over the rocks at La Jolla, the fire baskets on the beach outside the Hotel del Coronado where Billy Wilder shot the exterior scenes of Some Like it Hot in 1959. Tijuana, Mexico just beyond the San Ysidro mountains. A barefoot aging hippy, brown as a nut, doing wheelies on his bike on the boardwalk at Pacific Beach amid the windchimes and skateboarders.

Just six weeks later, I was standing 5,150 miles away in a pouring, blowing rain beside a very different sea in the Scottish town where I grew up. Here were familiar rock formations, unchanged for hundreds of years, the outcrops pushing out into the North Sea. Gulls surfing on the ever-present wind or perched on chimney-tops, screeching. In those few short weeks, I’d gone from from huevos rancheros to smoked haddock for breakfast, from tequila to scotch, and from dazzling blue skies to persistent grey and chilly rain that, surprisingly at the end of the day, relented and broke out into watery evening sunshine.


The writer Christopher Rush who grew up on the shores of East Fife and still lives there described the beaches of that coast in his lyrical memoir, Hellfire and Herring:


Down on the shore in the quieter weather the tide was creeping up the dry stones of the beach. The water, which had been wintrily muddy in the evenings, in the mornings became as clear as glass all along the coast, and scum could be seen now floating on the flood tide. Then the first green water of the year appeared whenever there was a fresh wind blowing from the north-west. The sea turned a living blue, with further out the long lanes of deep emerald green that could never be seen in winter. In the shrimp-filled rock pools, where the baby porcelain crabs scuttled like loose thumb-nails, the green sleet started to grow and the whelks to gather in large numbers, wet black ruby clusters.

Even the seaweed in California looked different and was on a larger scale. 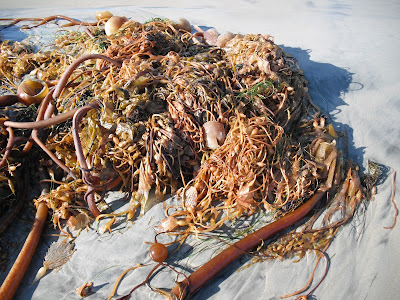 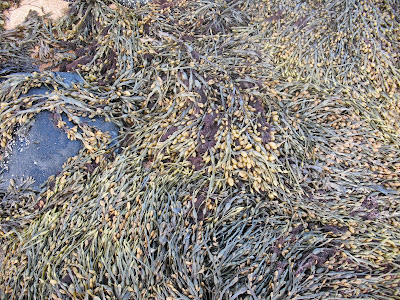 For me, it was a spring full of changing perspectives, of different ways of seeing the world. It showed me how much a writer needs to be rooted in one place on the planet, to know the feel of every stone under her hand, but also to cast her net outwards and never stop traveling to brand new places, giving the imagination the chance to roam ever wider while never losing sight of where it began.