From the Mouth of a Shark 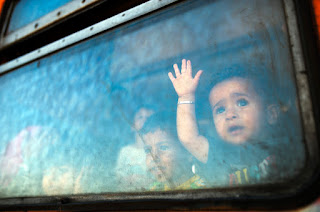 “An emigration is possibly the loneliest experience a man can suffer. In a way it is not a country he has lost but a home, or even part of a home, a room perhaps, or something in that room that he has had to leave behind, and which haunts him. I remember a window seat I used to sit in as a youth, reading Pushkin and teaching myself to smoke scented cigarettes. That window is one I am always knocking at asking to be let in.”

When I read The Jewel in the Crown quartet by Paul Scott, I was struck by this passage. It’s spoken by the character of Dimitri Bronowsky, the elderly White Russian émigré who had spent much of his life in India having fled Russia after the Revolution.

It reminded me of a conversation I had many years ago with a Hungarian colleague who had to leave his country after the uprising of 1956 and settled in the UK. When we talked, glasnost was just beginning and he’d finally been able to go back. He told me about smelling the acacia trees and seeing geese crossing the road and getting a powerful sense of home.

Home. It’s an evocative word, somewhat over-freighted with meaning. I’m an emigrant myself so I know how easy it is romanticize the place you left behind. Pictures of the South Downs or the Scottish coastline or a certain bend in the river Thames can bring actual tears to my eyes.

But I am an exile by choice, not circumstance. I can go “home” any time I want for the cost of a plane fare. I left to broaden my horizons, not because of economic deprivation, starvation, prison, torture, or fear of death, which is what the vast majority of people arriving in Europe from Syria and other unstable countries were facing. In the powerful video that spearheads the fundraising drive called “Help is Coming,” the actor Benedict Cumberbatch quotes from a powerful poem by Warsan Shire called Home. It begins: “No-one leaves home unless home is the mouth of a shark.”

They left to save their lives and to try to give their children the kind of future that most of us who live in prosperous Western countries take for granted. It is to be hoped that, like the 19th century emigrants arriving at Ellis Island and the displaced European refugees at the end of World War II, they will find peaceful places to settle where their children can grow and thrive and contribute to their new communities. Yet they will always be haunted by the sights, smells, and sounds of their native lands, which they may never have the chance to see, smell and hear again.

Click here to donate to a remarkable campaign by a coalition of writers led by the children’s author Patrick Ness to raise funds for Save the Children’s efforts to help and settle Syrian refugees.

Posted by Fiona J.Mackintosh at 12:23 PM No comments: