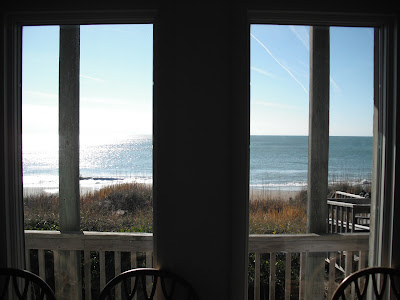 "Doesn't it seem to you," asked Madame Bovary, "that the mind moves more freely in the presence of that boundless expanse, that the sight of it elevates the soul and gives rise to thoughts of the infinite and the ideal?”
Gustav Flaubert, Madame Bovary (1856)


Mike and I spent the week before Thanksgiving with friends in the Southern Outer Banks of North Carolina. The resort town of Emerald Isle is on a 30-mile-long pencil of low-lying land attached to the mainland only by a bridge at either end. The island has a sound on one side and the Atlantic Ocean on the other, and the towns along the island are known as the Crystal Coast. There are no high-rises along the beach, just unbroken rows of vacation houses just feet from the dunes, almost all of them empty in November – except ours.
So we woke up in the mornings and fell asleep at night to the sounds of the sea through the open windows. Like many people, I’ve never been good at stilling my mind, but somehow it becomes much easier to do when sitting on a strand of wet sand just watching the waves. There can be no more soothing sensation in the world. Every muscle in my body relaxes from its habitual semi-clench. I’m sure it’s partly because wave sounds are what all humans remember from being inside our mothers’ bellies. But in my case, it’s also because the North Sea provided the everlasting soundtrack of my childhood so, wherever I am in the world – the Carolinas, the English Channel, Tahiti - the sea is always home.


Our first two days in Emerald Isle were so hot it was impossible to sit for long in the direct sun. We wore shorts and tee-shirts, and I even waded in the Atlantic. But then the weather turned grey and cold. Mike and I tried to play tennis on the town’s courts and had to battle the icy wind that whipped the ball around. Then on the last full day of our week, the wind died down and the sky cleared, and we walked on the beach in sweaters and jackets, feeling the warmth of the sun on our faces. From blazing sun to cloud-curdled skies to chilly brilliance all in the space of a week.
I spent the days reading and writing, gazing out at the shrimp boats with their masts akimbo, balanced on the horizon like bathtub toys. Lines of pelicans – still an exotic wonder to my European eyes – flew low over the water in perfect formation. And several times a day we would spot a pod of dolphins cresting through the silver shimmer on the grey Atlantic water.


On my beach walks, I was fascinated by how the tiny sanderlings would skitter across the wet sand with the ebb and flow of waves, always just ahead of the foam. And on several days I saw huge congregations of sea birds holding a vigil on the flat wet sand, all tightly packed and facing the same way – herring gulls,  black-backed gulls, willets, terns, and every kind of sandpiper. They seemed impervious to the proximity of a human, but at the approach of a dog, however docile, they would rise en masse only to settle down again a few yards further down the beach. Once Mike and I came across a dead cormorant on its back in the wet sand, as black as an oil slick and perfect except for a slight pink perforation on its breast.
Now we’re back in wintry Washington, with the rush and hustle of the holiday season upon us, and I’m already losing that unclenched tranquil feeling I had as I sat at the water’s edge. The sea is no longer just outside my window, but I know I must learn to listen to the inner ocean that is always there in my memory and imagination.

Posted by Fiona J.Mackintosh at 3:50 PM No comments: 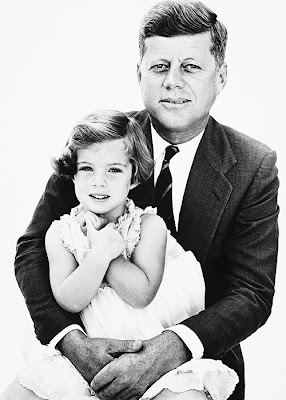 ﻿
R.I.P. John F. Kennedy, Assassinated 49 years ago tomorrow, November 22, 1963
“If art is to nourish the roots of our culture, society must set the artist free to follow his vision wherever it takes him.”

Posted by Fiona J.Mackintosh at 9:25 AM No comments: