I'm happy to be able to report that my booklet about Princess Titaua of Tahiti – From the South Seas to the North Sea – is now available to order by credit card or via Paypal directly from the publisher, the Kilrenny and Anstruther Burgh Collection.

Many thanks to all who have bought it so far.
Posted by Fiona J.Mackintosh at 11:53 AM 1 comment:

Email ThisBlogThis!Share to TwitterShare to FacebookShare to Pinterest
Labels: From the South Seas to the North Sea, Tahiti

[Sorry about the lack of recent posts. I’ve just got back from my two weeks in the UK where I only had enough bandwidth to check my emails so I wasn’t able to access Midatlantic. This next post was written during my trip. ] 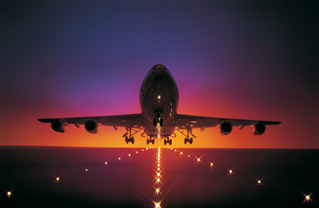 The drone of flying engines is a song so wild and blue
It scrambles time and seasons if it gets through to you
And your life becomes a travelogue
Of picture postcard charms
Oh Amelia, it was just a false alarm.
“Amelia” - Joni Mitchell, 1976
What I’ve always loved about flying is looking down on the earth from above, seeing the contours of the land as you do when you look at a map.  It’s a perspective that never fails to lift your head out of your navel, bringing home to you not only the insignificance of your own problems but the fact that down there millions upon millions of human stories are writing themselves every day.
I’ve seen some amazing sights from the air during the daytime. I’ve flown over the daunting white peaks of the Alps, and I've seen hundreds of hot-air balloons rising at dawn from a plane taking off from Albuquerque.  And from a small plane flying from Puerto Rico to St. Thomas, I’ve looked down on islands surrounded by concentric rings of the glorious greens and blues of the Caribbean sea.
Memorable though all these experiences were, I am even more enamored of flying at night. I love the multi-colored lights that guide the plane skyward – the blue runway lights, red approach beacon lights, the winking white lights on the flight path towers. Then there is the remarkable sight of the ribbons of light that are the streets and highways, cutting their way through the surrounding darkness like a diagram of humanity encroaching on the wilderness.
I will never forget being on a flight from London to Athens in the 1970s that passed over a thunderstorm that was unleashing itself on Paris. Watching from above as lightning shot downwards was a remarkable inversion of the normal, a glimpse into what it must be like to be a god on Olympus.  Another unforgettable memory came twenty years later when, on a night flight from Washington to London, I found myself looking out at the Hale Bopp comet, so close that it seemed to be riding alongside the plane.
But nothing will match the memory of my first sight of Tahiti. We had flown out of LAX in a blazing red and orange sunset. The plane turned west over the ocean, and the coast of California slid away behind us. For the next eight hours, we flew over the vastness of the dark and utterly empty Pacific. When at last the plane began to descend, I peered out the window. At first I could see nothing but the same endless darkness. But when I screwed up my eyes, I realized with a sudden thump of the heart that we were flying parallel with a barely visible landmass, with a faint thread of light along the coast and a suspicion of mountains looming behind. I had lived in Tahiti in my mind for seven years and here it was at last – rising beside me in the tropical darkness like a mirage.
Posted by Fiona J.Mackintosh at 6:24 PM 2 comments: