An Isle Full of Noises 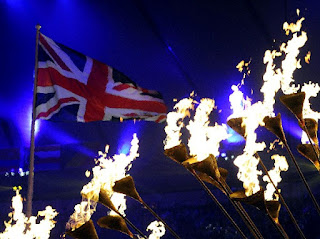 So the London Olympics are over. Never again in my lifetime will the Olympic rings hang from Tower Bridge, and the knowledge makes me sad. I’d become used to turning on my TV every day to live pictures of my country – the Thames at Eton Dorney for the rowing, Horse Guards Parade for the beach volleyball,  glorious Greenwich Park for the equestrian events. And those crazy Opening and Closing Ceremonies – random, episodic, tongue-in-cheek, iconoclastic, and yet with moments of grandeur and dignity that took my breath away. The forging of the ring in the Industrial Revolution segment, the lighting of that amazing many-petalled Olympic flame, and its even more astounding extinction as a Phoenix rose from its ashes. And the moment above all others for me – understated and weirdly pantomime-y as it was – when Kenneth Branagh dressed as Isambard Kingdom Brunel spoke the words of Caliban, the misunderstood monster of Shakespeare’s imaginary island in The Tempest:


Be not afeard: the isle is full of noises,
Sounds, and sweet airs, that give delight, and hurt not.
Sometimes a thousand twangling instruments
Will hum about mine ears; and sometimes voices,
That, if I then had wak'd after long sleep,
Will make me sleep again: and then, in dreaming,
The clouds methought would open and show riches
Ready to drop upon me; that, when I wak'd,
I cried to dream again.


I hadn’t thought much about this year’s Games in advance except to make a mental note not to fly home while it was all going on. But as I saw the images of the city and its environs unfold on my TV screen, I regretted not being there. Not necessarily in the stadium or at any of the other venues, but anywhere in the United Kingdom just to share in that amazing 17-day nationwide celebration.
I’m sure that my friends in the US have thought me obsessed (if not possessed) as I cheered on Team GB and gloried in its remarkable medal haul. How do you explain to a country that wins everything almost all the time what it’s like to succeed after years and years of disappointment? No men’s champion at Wimbledon since 1936, no football World Cup winner since 1966, only 1 gold medal at the 1996 Atlanta Olympics... This is what we’re used to. The expectation of disaster and disillusion. The eternal morning after of the also ran. (Check out this interesting article in Tina Brown’s online magazine, The Daily Beast, on this very aspect of the British character.)
It’s a pattern that writers know well – the long apprenticeship, the recurring failures, the bursts of hope, and the subsequent false dawns. It makes some cynical and bitter and others more determined to succeed against all the odds. Although I have the occasional wobble, I count myself among those who refuse to give up, who think that it’ll all come right in the end. That’s the American in me coming out.  But just for this moment, I stand shoulder to shoulder with my fellow Brits and celebrate a very satisfying and most unusual triumph.
Posted by Fiona J.Mackintosh at 6:26 PM