Tongues of Men and Angels 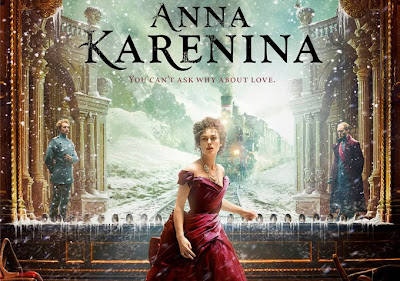 This week I finally got around to seeing Joe’s Wright’s extraordinary movie Anna Karenina starring Keira Knightley at her least mannered and most impressive. I remembered the critics as being widely divided about the staging of the movie’s action within an old theatre, some seeing it as “deliberate, showy artifice” (Chicago Reader) and “artistic hubris” (New York Times), while others declared it “an intoxicating spectacle” (USA Today) that “sings, dances, and finally soars” (Washington Post).
In my humble opinion, it was a triumph. I’d had my own doubts about how the setting would work, but they were swept away almost immediately by the beauty and originality of the visual effects. The movie has been called hyper-stylized, which is true but the staging not only didn’t deflect attention from the characters and their tortured emotions, it actually enhanced the unfolding of the drama. Click here to see a video about the genesis of Joe Wright’s concept. 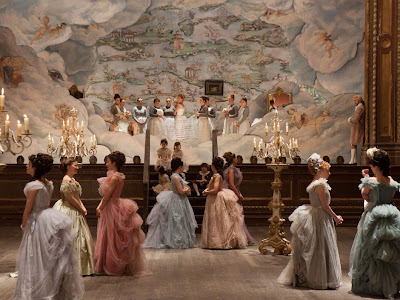 The movie is choreographed (by Sidi Larbi Cherkaoui) more like ballet than a traditional stage play, which added a welcome freshness to the depiction of the social context in which Anna’s doomed love story unfolds. The costumes (by Jacqueline Durran) are utterly stunning – just enough off-center to surprise and dazzle but not distract.  And once again (see my earlier post about his adaption of Parade’s End) Tom Stoppard does an extraordinary job of extracting the heart and soul of novel and transferring its essence to the screen.
Of course seeing the movie took me back to the book, which has long been on my top five list of novels for its complex characters and immaculate structure. All the climactic scenes that had resonated with me in Tolstoy's book were gratifyingly made flesh in the film. For example, take the ballroom scene where young Kitty Shcherbatsky, who had expected to receive a proposal of marriage from Count Vronsky, sees that he has eyes for no one but Anna. Compare Joe Wright's depiction of the scene here (note the innovative choreography) with Tolstoy’s description below:
“[Kitty] saw that they felt as if they were alone in the crowded ballroom. And she was struck by the bewildered look of submission on Vronsky’s face, usually so firm and self-possessed – an expression like that of an intelligent dog conscious of having done wrong. If Anna smiled, he smiled in reply. If she grew thoughtful, he looked serious. Some supernatural force drew Kitty’s eyes to Anna’s face. She was charming in her simple black gown, her rounded arms were charming with their bracelets, charming the firm neck with the string of pearls, charming the unruly curls, charming the graceful, easy movements of her little hands and feet, charming the lovely, animated face: but in that charm there was something terrible and cruel.” 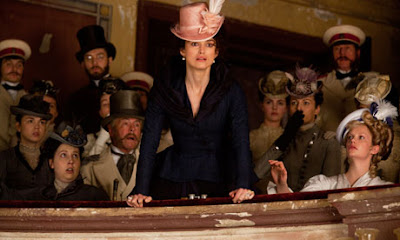 And here’s a still (above) and Tolstoy’s description (below) of the climactic horse race where Vronsky has a terrible fall and Anna cannot hide her feelings from her husband or the rest of the aristocratic crowd that surrounds her:


“... at that moment the race began and all conversation ceased. Karenin, too, fell silent as everyone stood up and turned towards the stream. Karenin was not interested in the race and so did not watch the riders but began listlessly scanning the spectators with his weary eyes. His eyes rested on Anna. Her face was pale and set. She was obviously seeing nothing and nobody but one man. Her hand convulsively clutched her fan and she held her breath. He looked at her and hurriedly turned away... when Vronsky fell and Anna moaned aloud there was nothing very out of the way in it. But immediately after, a change came over Anna’s face which was positively unseemly. She completely lost her head. She began fluttering like a caged bird, at one moment getting up to go, at the next turning to Betsy.


But Betsy did not hear her. She was leaning over and talking to a general who had come up to her.  Karenin approached Anna and courteously offered her his arm.


“We can go if you like,” he said in French; but Anna was listening to what the general was saying and did not notice her husband.


She now saw an officer running across the course towards the pavilion, from the place of Vronsky’s accident. Betsy waved her handkerchief to him. The officer brought news that the rider was not killed but the horse had broken its back.


On hearing this Anna sat down hurriedly and hid her face behind her fan. Karenin saw that she was weeping and that she was unable to keep back either her tears or the sobs shaking her bosom.”

All I can say is see the movie and read the book - in whatever order you prefer. They are both masterpieces.


Posted by Fiona J.Mackintosh at 4:23 PM