Life on the Never Never


On my most recent visit to England last month, I was able to take a nostalgia trip to the city 150 miles north of London where the story of my family began ‒ Nottingham in the English Midlands. Famous for Robin Hood, Nottingham Castle, and the lace industry, the town holds a powerful place in my imagination because of the many vivid stories I heard about it from my parents and grandparents as I grew up.

My father was born in the city in 1927 and my mother in 1932. In the writer Graham Greene’s autobiography A Sort of Life, he describes Nottingham as it was in the late 1920s when he went to work there as a cub reporter.
“I arrived one wet night in Nottingham and woke next morning in the unknown city to an equally dark day. This was not like a London smog; the streets were free of vapour, the electric lights shone clearly: the fog lay somewhere out of sight beyond the lamps. When I read Dickens on Victorian London, I think of Nottingham in the twenties. There was an elderly ‘boots’ still employed at the Black Dog Inn, there were girls suffering from unemployment in the lace trade, who would, so it was said, sleep with you in return for a high tea with muffins, and a haggard blue-haired prostitute, ruined by amateur competition, haunted the corner by W.H. Smith’s bookshop. Trams rattled downhill through the goose-market and on to the blackened castle. Against the rockface leant the oldest pub in England with all the grades of a social guide: the private bar, the saloon, the ladies’, the snug, the public. Little dark cinemas offered matinee seats for fourpence in the stalls. I had found a town as haunting as Berkhampsted, where years later I would lay the scene of a novel and a play. ... It was the focal point of failure, a place undisturbed by ambition, a place to be resigned to, a home from home.”
This was in this very city of fogs and trams and industry into which my parents were born. My mother remembers times coming home from school on the bus when the air was so thick that conductor would have to walk ahead of the bus to guide the driver.

She and my father grew up a few miles away from each other – my mother in Beeston to the west, and my father in Sherwood to the north. Their families were far from prosperous. One of my grandfathers was a corporation electrician and the other was an insurance salesman. Both families moved many times, and considered themselves lucky when they were able to afford a house with an indoor toilet and bathtub.

When World War II broke out in Europe, my mother was 7 and my father was 12. Nottingham was a strategic target because of its many armaments-related factories, airfields, and the Royal Ordnance factory at Ranskill. The city was bombed 11 times. It even had its own Blitz on the night of May 8-9, 1941, which killed 159 people.

The wartime atmosphere in the city is well captured in this passage from the gritty bestselling novel Saturday Night and Sunday Morning by Alan Sillitoe:

“He remembered his father digging up the back garden to plant an Anderson Shelter, Arthur stumbling into the hole and getting a clout for doing so. And later the family sat on the planks inside, coughing from the damp moist soil, scratching their scabied bodies, and listening to the weird-sounding hollowness of the naval guns behind Beechdale woods, his white-faced father rushing in at midnight, a teapot in one hand and half a dozen cups strung along the fingers of the other, having braved falling shrapnel to mash [make tea], back just in time to escape the Jerry plane that sprayed the factory with its machine gun. In the long high-pitched whistle of a bomb the whole world was caught and suspended so that you just wondered, wondered, wondered, keeping quite still during the whistle, not breathing, not moving a finger, your eyes open wide, until the explosion on the railway yards or on a pack of houses in the next street made you glad to be still alive.”
My father knew that feeling. During Nottingham’s first bombardment on the night of August 30th, 1940, he was with his mother and young brother in their Anderson shelter in their back yard when a high explosive bomb made a direct hit on a neighbor’s house. Eighteen people were injured and an 18-month-old baby died of his injuries. The next day, undaunted, my father clambered over the rubble in search of prize bits of shrapnel. At around the same time, my mother and her younger sister were “evacuated” a mere three streets away to their grandparents’ house, which ironically was closer to the ammunition storage depot in Chilwell. My mother remembered walking home from school during a daylight raid and, in an attempt to reassure her younger sister, saying, “Don’t be scared, Paul, it’s only a bomb.” To this day, aged 82, she goes pale if she hears the wail of an air raid siren on some television drama.

Saturday Night and Sunday Morning was not a book about the war but about its social aftermath. It encapsulated the Nottingham of the 1950s, as did the film that was made from it in 1960 directed by Karel Reisz. It starred Albert Finney as the hard-drinking, womanizing young Arthur Seaton whose only desire is for the world to “let a bloke live.” The book is as much about the hardscrabble working class streets of Nottingham as it is about Arthur himself:

“[The street] was long, straight, and cobblestoned, with lamp posts and intersections at regular intervals, terraces branching off here and there. You stepped out of the front door and found yourself on the pavement. Red-ochre had been blackened by soot, paint was faded and cracked, everything was a hundred years old except for the furniture inside. ‘What will they think on next?’ Seaton said, after glancing upwards and seeing a television aerial hooked on to almost every chimney, like a string of radar stations, each installed on the never never [hire purchase].”


This is the Nottingham that my parents lived in as young adults. The picture at the top of this post is of Finney, Shirley Anne Field, and Norman Rossington filming the movie in the Nottingham Market Square. The Market Square is where my mother, still in high school, once made a date to meet four different young men on the same evening, one at each corner, and then stood them all up and went to the pictures with her sister. The fictional Arthur Seaton works on the production line at the famous Raleigh bicycle factory as did his creator, Alan Sillitoe. During the same period, my mother as a newly-wed was also working at “the Raleigh,” first in the typing pool and then as personal secretary to the Export Director. 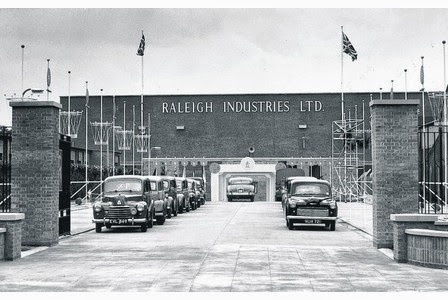 Both of my grandfathers had left their families either during or immediately after the war so money remained extremely tight. To help support his mother and brother, my father left school at 14 to become a Post Office telephone engineer, one of the young men who climbed up the poles. After doing his National Service, he took advantage of his education benefits under the UK government’s equivalent of the GI Bill and enrolled in Nottingham University where he met my mother. They were both the first in their families to go to college and found they had plenty more in common. My mother would have preferred to go to art school but settled for a degree in French while my father got a First in Physics. He stayed on at the University to do a PhD in electrical engineering, and my mother’s boss at “the Raleigh” let her borrow one of the firm’s electric typewriters so she could type out my father’s thesis.

As a result of his excellent academic credentials, my father was head-hunted by the famous Bell Laboratories in Murray Hill, New Jersey, so in 1956 my parents set sail for the United States. It was a world a million miles away from Arthur Seaton’s soot-stained terraces and their own bomb-haunted childhoods – a chance for clean start in a vibrant and prosperous land far from the land of the never never. 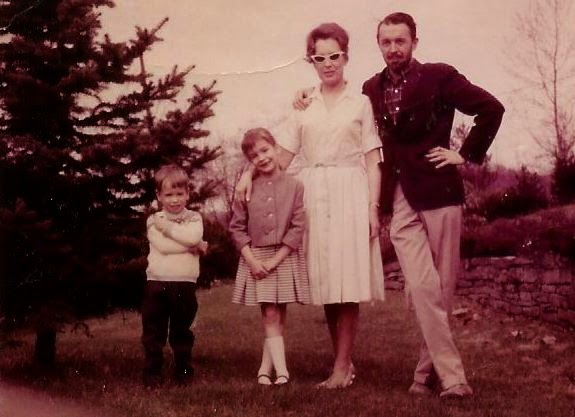 Posted by Fiona J.Mackintosh at 1:19 PM