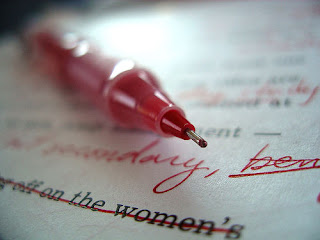 Believe me when I say that I’ve always had the greatest respect imaginable for people who speak several languages. I am ashamed to say that I only speak one (other than a bit of schoolgirl French), but I have always tried to make up for this deficiency in quantity with an abundance of quality. In other words, I may only know one language, but, because of that, I have always felt it was important for me to know that language really, really well.
So it won’t surprise anyone to learn that I earn my living as an editor. Many of my clients speak English only as a second, third, or even fourth language, and their verbal fluency is nothing short of remarkable (I bow down in awe). But because their written English is often heavily inflected with the rhythms and idioms of their own native languages, they hire me to help them to “translate” their documents into English as it is spoken in 21st-century America.
Here are a few examples of the kind of sentences that I encounter on a daily basis. I don’t present these examples to make fun of them at all but simply to illustrate what I do, reconstructing sentences like these in ways that sound more felicitous in American English while – with any luck – not losing anything of the writer’s original meaning.
“Forest fires affected relative more the poor than the rich since 1995, but not so in 2000.”
Edited version – “Since 1995, forest fires have affected the poor more than the rich, except in 2000.”
“Where charges are required to be paid by persons availing services but certain categories of persons who cannot afford to pay are rendered services free by charge.”
Edited version – “In situations where people are charged for the services they receive, exemptions are granted to certain categories of people who cannot afford to pay these charges.”
“In 1993, one’s income and the probability of her being insured were correlated, but rather weakly.”
Edited version – “In 1993, there was a weak correlation between the level of a person’s income and the likelihood of her being insured.”
And my all-time favorite which is too charming to tamper with:
“Besides writing better and incurring into less orthographic mistakes, girls are, in general, more fluent than boys… and their calligraphy is very carefully elaborated.”
In that spirit, I hereby make a heartfelt commitment to my editorial clients of 2011 that I will make every effort to ensure that I make no orthographic mistakes and that my calligraphy is very carefully elaborated. They should expect nothing less of me.
Posted by Fiona J.Mackintosh at 8:46 PM