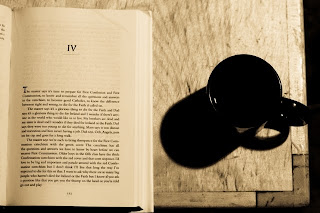 Image courtesy of Ian Kahn at freedigitalphotos.net
Like most people, every year at this time I make a bunch of New Year’s resolutions. I don’t think of them as hard and fast commitments to myself but more like rules to live by, reminders that I can do better. There are some old perennials that re-occur every year - lose 10lbs, stop screaming at other drivers in traffic, and cope better with stress. But to leaven the Calvinist self-improvement tone (and just because it’s fun), I always include a New Year’s resolution about what I want to read in the coming year.
Last year I resolved to fill two large gaps in my reading experience and knock out James Joyce’s Ulysses and Thomas Mann’s The Magic Mountain. Ahem. What was I thinking? Not much leavening there, I can tell you. I ploughed my way through The Magic Mountain, marveling all the while at how Mann managed to take a simple story of a hypochondriac  who chooses to live like an invalid at a Swiss sanatorium and make it last for over 700 pages. Don’t get me wrong – I love long books, but not when the story in question could be told in less than half the time. Mann himself originally intended the book to be a novella – I rest my case. There are some tour-de-force passages in the book and even some that are downright funny, but I was soon bogged down again in the author’s ruminations on the mysterious concept of time or in long, abstruse debates between the characters on religion, politics, and philosophy. I read it to the end but wouldn’t mind having all that time back to spend more wisely.
As for Ulysses, I’ll admit I didn’t even crack it open until a couple of weeks ago, on the principle that starting it in 2010 was still consonant with my resolution. I sailed through the first few pages, enjoying the banter between the three young men squatting in the Martello Tower outside Dublin. But then I hit Stephen Dedalus’s first internal stream of consciousness monologue. Now I consider myself a pretty well-educated, well-read kind of a gal, but I was in totally uncharted waters here. And not necessarily in a good way. I remembered Virginia Woolf’s waspish comment that Ulysses put her in mind of a queasy undergraduate scratching his pimples. She also called the book "a memorable catastrophe." Talk about a two-faced compliment. But I will persevere a bit longer and may even switch to listening to it on audio which friends tell me makes it a little easier to follow.
All of which is to say that I’m not going to be so hard on myself in 2011. Here’s my list so far - the only two Dickens novels I’ve never read – Barnaby Rudge and (believe it or not) A Tale of Two Cities – Paul Scott’s Raj Quartet about the last days of the British Empire in India, and Evelyn Waugh’s Sword of Honour trilogy. As I said, I do like long books and that hasn’t changed despite my experiences of 2010.
So is anybody else making any reading resolutions this year? ﻿
Posted by Fiona J.Mackintosh at 2:24 PM